Tatting time seems hard to come by at the moment, so instead of tatting the entire Wreath, I decided to play with a segment of it. You can use any stitch count you like to create your own wreath or use the numbers I've already worked out.


In muskaan's This Way or Tat? diagrams thus far, she has repeatedly paired DS (double stitches) and RODs (reverse order double stitches--you just tat the halves in the opposite order) as options producing the same directional results. As I've said before, I don't use RODS very often. In fact, I've used them more in the last month than I've used them in the rest of the more than 20 years I've been tatting. :) 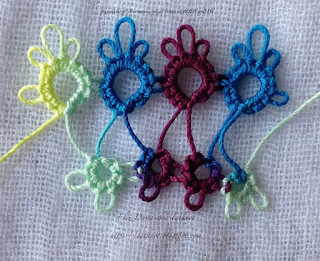 Experiment #1: If RODs and DS both result in tatting that progresses in the same direction, I should be able to alternate between them with no change in the direction the work is progressing. I tried it in the small rings pictured above. I started the tatting with the large ring in the upper left corner. The first and third small rings are made with RODs. The second and fourth are made with DS. It really didn't make any difference to the direction in which the work progressed. 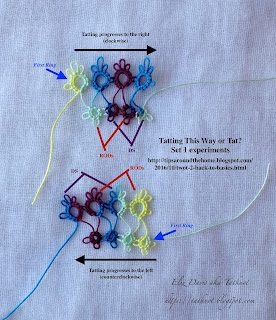 Experiment #2: A challenge from muskaan to start with a different ring. While I continued to alternate ROD rings and DS rings, it really won't matter. Tat with whichever method you prefer. I normally start with an inner ring and tat both small and large rings with DS.  I've noted my starting ring in each of the two tatting segments above. I've also placed each piece with the starting ring face up (note you can see the top of the double stitches on either side of the picots). The starting point did impact the direction in which the work progressed.

I know some of you are thinking, "What does it matter?" If at this point in your tatting, you aren't running into any problems following the diagrams you use and you don't care, there is nothing wrong with that. Over the many years that I've been tatting, I've tatted lots of pieces with the knowledge and understanding I had at the time. It was fun and it was rewarding. Over those years, though, I began to notice things (some of them very small) that slowly began to impact how I chose to work a design and how I chose to display the finished piece. Muskaan's explorations are very timely for me because I had begun to notice that the direction I follow a diagram DOES matter for some designs and I was starting to wonder why this is so. With her help, I'm developing my awareness of these differences in direction with the kind of designs that have never troubled me, knowing that it will come in very handy when I run into the next one where it does. So, enjoy where you are in your tatting experience and choose to stretch yourself a bit more if and when you are ready.

Now, I believe I promised muskaan that I would share my mental trick that makes RODs easy for me. It relies on two factors:
1. Once you've been tatting for a while, you don't really have to think about how to form double stitches. Your tatting flows easily from one double stitch straight into the next. You are already used to a 1st half following a 2nd half.
2. I don't usually count 1/2, 1, 1 1/2, 2... I count 1, 2, 3... Every 2nd movement of my shuttle gets the number. RODs (reverse order double stitches) are just double stitches that start with the 2nd half, rather than the 1st. The only thing I have to remember is which movement starts the tatting of the ring or chain segment I'm about to begin. That same movement starts the tatting after every picot in that element. If I'm working RODs, that movement will be the over and down movement that usually forms the 2nd half. If I'm tatting DS, that movement will be the under and up movement that usually forms a 1st half. Remember, the second movement gets my count.

Once I get started, it takes only a microsecond to orient myself at the start of each element or after a picot. I hope some of you find this is helpful.

Posted by Eliz Davis aka Tatknot at 1:53 PM

Tatting time does seem to be at a premium these days, so I truly appreciate the efforts you and muskaan have been putting forth in this exploration of rings. I know I'll be referring back to your posts when I manage to get around to working on these experiments. Thanks for sharing your notes!

I count the way you do, maybe most do? I started doing RODS about three years ago and do the same as you but I still find that I must quickly turn and check my stitches. I've got pretty good at b in able to recognize what 3 -4 stitches look like but I. Always have to count 5 or greater. Sigh

Love the way you included extra experimentation -- that's what makes it exciting and helps us all learn further ! Excellent explanation, and spot on conclusions :-)
I am so grateful that you are snatching moments and focus to work on this !

Thanks for the RODS trick :-) I count in similar fashion, but prefer to cross check by turning the segment over, as Michelle does ( I often tat while watching tele or chatting :-(. Picots do give away the side easily.
That directional tatting has become so much second nature now (I started full time less than 2 years back) became evident a couple days back when I was tatting samplers for a tut and I subconsciously kept switching to RODS chains - led to many a retro-tat. Another aspect is remembering to post shuttle when tatting an RODS ring - this is still a bit new to me.

Thank you, Diane, Michelle, and muskaan.

I don't post the shuttle on RODs rings, muskaan. I've never found it necessary. Perhaps I should make a few rings for comparison and consider it again. The only time I post a shuttle back through a ring is when I'm determined to get a rounder look to the ring. For that, it doesn't matter whether I'm using DS or RODs, the posting back through seems to make a rounder ring.