I had a flower left over from the first Tischband I did as part of the Tat Along and it was purple--perfect for what I had in mind. I designed the rest of it as I went. I wanted the illusion of a small budded vine climbing the stem. The contrast between the greens is not as great as it appears in the picture. I pearl-tatted the darker  green stem. The lighter-colored vine is blended with light purple size 80 thread. I think I should have added a few picots to the little buds to give them a softer look, but my girls liked it as it is.

This was a retirement gift for a co-worker who has become a friend. I shall miss her smiling face and gentle manner which brightens the work day for all of us, but I know she is going to enjoy extra time with her husband who had already retired. They plan to do some traveling and hiking and visit their children and grandchildren who live farther away. I wish Pam the very best.
Posted by Eliz Davis aka Tatknot at 9:49 AM 4 comments: 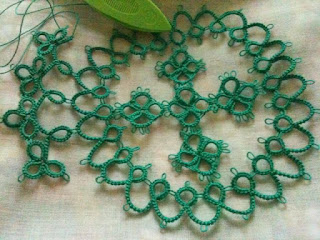 I've been tatting up a design by Anne Orr this week using Lizbeth #688. I used some split rings to reduce the number of starts in the center and I'm tatting the clovers of the final round with the second shuttle which changes the directions of some of the chains. I tried it both ways and found I preferred this one. It will look even better when finished and blocked. I liked it so well without the final round that I was tempted to leave it off.

I've finished another project as well, but it is a gift for a dear co-worker who is retiring this week. I've taken a picture, but I'll wait until after her retirement reception Friday to post it on the internet. I'll give you a hint, though. She loves plants.

I have an order for some bracelets so I'll be working on those for the rest of the weekend.

Have a great week!
Posted by Eliz Davis aka Tatknot at 7:18 PM 6 comments: 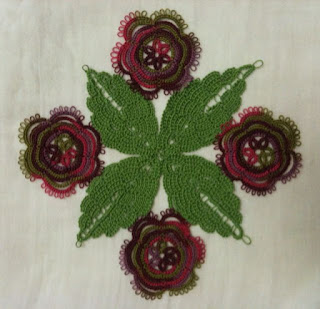 Here it is. The flowers all have leaves now. I used a smaller center picot this time and the result was much better. I think this one is the best one yet. I've really enjoyed this challenge. I'm likely to use Ruth's gorgeous leaves again. It is a great design.

I'm already well into another project--some ideas I've wanted to develop for my Etsy shop for quite a while. I was able to get a little tatting done during my lunch break today which helped me make a good start. I'll tell you all about it when I've gotten a bit more done.
Posted by Eliz Davis aka Tatknot at 6:46 PM 9 comments:

Spring is in the air

The weather here in Arkansas has been warm and lovely. This weekend was to be devoted to filing our income taxes, but I spent the day updating my Etsy shop instead--much more enjoyable. I decided to have a one week sale at Etsy, marking some of my prices down by 15 to 25 percent. Meanwhile I'm working on some new ideas as I finish up the Tischband.
Posted by Eliz Davis aka Tatknot at 6:52 AM 2 comments:

Here is my second effort at the Tischband by Ruth Scharf which is the focus of the Tat Along. I kept my tatted chains much looser this time which made for a longer leaf. I also added a large picot to the base of the first leaf for joining the remaining ones. As you can see from the picture, it didn't need to be as large as I made it, but this did work well for me. I'm about to start my third effort. The recipient will get to decide whether it will be the triangle shape of my first effort or the square of my second effort. The flowers are already completed and I'm starting the leaves. I confess I would have trouble choosing. I really like both. The triangle one serves as a coaster on my desk at work and I really enjoy seeing it there every day. 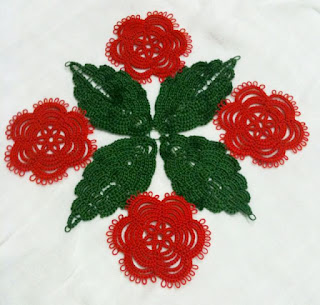 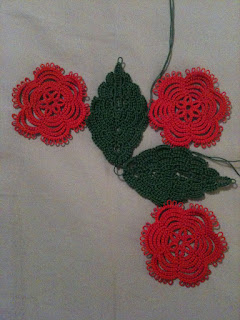 Looser chain stitches and the center large picot are working well so far.
Posted by Eliz Davis aka Tatknot at 7:47 PM 3 comments:

TIAS completed and Tat Along 2 Progress

TIAS complete! I managed to finish my TIAS goat Sunday afternoon. Here he is! Thank you, Jane. 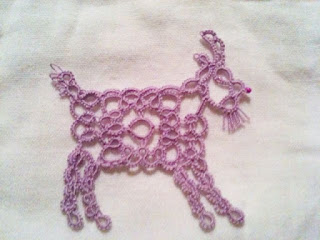 Tat Along Progress:  I also started another set of leaves with less tension in the chains and the additional 2-2 on that final round. The first leaf did come out longer than those in my first Tat Along. I'm just now nearing the end of leaf #2 so it is too soon to tell how it is going to turn out. I'll keep you posted.

The triangle Tat Along went with me to work today and has a place on my office desk. I keep a clear insulated cup on my desk to encourage me to drink lots of water and the Tat Along is now its official coaster. Since the cup doesn't sweat, I don't really need a coaster. My desk just NEEDED the tatting. You tatters will understand completely, I know.

Have a great week, everyone.
Posted by Eliz Davis aka Tatknot at 8:04 PM 5 comments:

Tat Along - one complete 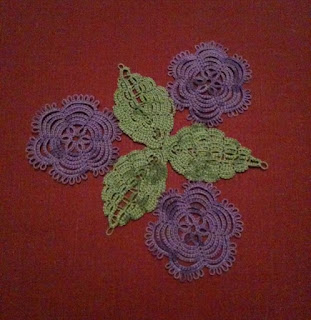 I finished the first of my efforts at the Tat Along Project. This is the one with the Flora #213 flowers. The thread looks purple in some light, rather blue in others. I ran into the same problem that many others did as I was tatting the leaves and adding the flowers. I haven't read enough of the other blog posts about it to know how others have resolved the issue. I had already decided that if I saw the same spacing issue developing for me, I would rearrange the elements into a triangle--leaves to the center, flowers to the outside. Here is what it looks like. I confess I flipped the final flower motif before making the final join, but this one is for me and I will enjoy using it anyway. It will sit on my desk at work. (By the way, the dark spots are just water. It wasn't quite dry, but I wanted to get this post done before other events of the day crowded it out of my priority list.)

Let me say that I love the two motifs, leaf and flower, that Ruth Scharf designed for this pattern. The flower was quick and easy to tat. While the leaf pattern was a bit harder because of the need to pay close attention to stitch counts as you went, it was still a pleasure to tat and looks terrific. I will definitely use it again. In fact, I have two more sets of blooms that need leaves!

The problem seems to me to be where the leaves join to each other. If I understand Ruth's instructions correctly, they are to join at the base. Adding a large picot to the base of the first leaf that could be used to join the remaining leaves might help, but, because of the shape of my leaves, I would have exposed picot thread between the leaves. I'm thinking that with the next effort I might add another 2-2 to that last round to let me move the larger parts of the leaf further from the join. I'll make that first leaf's picot larger to accommodate the joining of the other leaves. I'm also going to try to keep my joins looser. The leaves in Ruth's picture look longer and much less dense than mine.

I'm going to try to finish my TIAS this afternoon before I start my next effort at the Tat Along. I saw that goats are still arriving so I don't feel quite so bad about finishing late.

Happy Tatting, Everyone. Thanks for reading my ramblings.

I meant to share this with you beginner tatters several weeks ago, but it slipped my mind. Seeing Mary Ann's tatted crystal bracelet today reminded me. This tatter has shared a simple edging pattern which she used to decorate a hanky. Check out Mary Ann's blog.
Posted by Eliz Davis aka Tatknot at 9:09 PM No comments: