I've finally made some progress on a project I've wanted to do for ages. It's a resource for those of us who want to design tatting. If you think about it, tatting is made up of ring shapes (usually a ring), curves (usually chains), and straight lines (traditionally the bare thread). So with those basic elements in mind, what can we substitute or modify to get a new look? Georgia Seitz is going to share my handouts in the online classes tomorrow. I invite you to visit the links she has provided at http://www.georgiaseitz.com/2016/2016index.html and even attend one of the class sessions if you can. I value your input, so email me or post here if you think of something that should be added. It is a resource I want to make freely available to all, possibly even in a format that you can modify to reflect your personal preferences. One handout contains ideas for modification or substitution. The other includes links to techniques and patterns for practice or example. In some cases, there are lots of sources for the technique, and my document can't reasonably include them all. For that reason, I'm thinking it might be good to make it customizable. I'm still thinking. Remember it's a work in progress.

An Element-al Approach to Tatting Design*

*Please note that I've changed this link to take you to my Techniques page. I will keep the links on that page of my blog connected to the latest version of these handouts. The pdfs will eventually be replaced with Word documents that you can customize for your own use.

Posted by Eliz Davis aka Tatknot at 5:18 PM 3 comments:

Wow! Where does the time go? The older I get the faster it seems to move.

I hope you'll think better late than never as I update you with what I've been working on in the months since my last post. 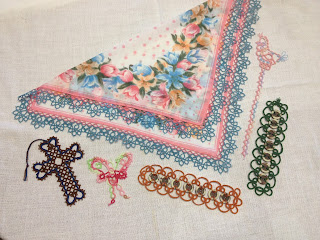 *I designed the two button bookmarks, but they are a simple combination of rings and chains.
*This cross by Jackie Fiuntini of New South Wales is a favorite go-to piece for me. It was published on page 3 of Tatter Tales, Volume 3, Issue 3.
*The little fairy with the wings is adapted from a combination of the features I liked best in Teri Dusenbury's Pincess Bijou Fairy and her Princess Dorie Fairy. Both original patterns were printed in her Tattle Tales newsletters. Princess Dorie is available online along with a few of her other Papillon Princesses at http://teridusenburystattletales.blogspot.com/2014/09/tatting-bookmarks-papillon-princess.html, but I don't see Bijou among them.
*The Bird of Paradise Bookmark is from page 29 of Dianna Stevens' Animal Bookmarks, A Tatted Zoo (2004).
*The hanky edging is Eternity Rings by Mary Konior. You'll find it on page 26 or Tatting with Visual Patterns (1992).

I designed an edging for another hanky when I couldn't find a pattern that seemed just right. You'll see it a bit later along with a picture of the fairy tale tatting finally up for display in my granddaughter's bedroom. It took us forever to find the ivory velvet I wanted for the backing.