Spoiler alert: If you are working on muskaan's This Way or Tat series, and wish to complete the challenge of creating a mirror image of the Laurel Leaf on your own, read no farther! 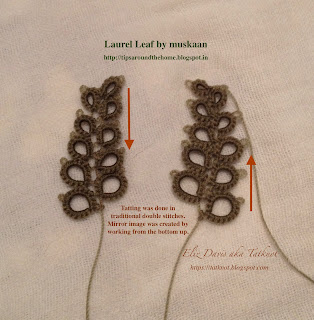 The tatting is still damp from spritzing and finger pressing, but I'm so excited I just had to post this right away.

Have you ever persisted in doing something just to see if it could be done? Some of you might have figured this out right away, but it would have spoiled my fun had I asked you how to do it. (Hence the spoiler alert above.)

The background: You see, it's obvious to me that there are a lot of tatters who prefer to use traditional double stitches. That's fine. It's my own preference most of the time, and there is no right or wrong method.  I knew that I could use RODs to create a mirror image. (Muskaan shares more about this method in her blog.) My challenge to myself was to do it with traditional double stitches only.

I won't tell you some of the many things I tried before it suddenly occurred to me to tat it from the bottom up! I began with a true ring just as I did with the first one, but I was actually starting the tatting from the back. The tatting of the double stitches in the rings must be in reverse order, but that is really easy to see in the diagram--instead of that bottom ring being tatted 3+6-9, it had to be tatted 9-6-3 with the last picot being very small for joining the bare thread as I worked my way up. That same rule holds for all of the rings. I left the shuttle thread attached to the top ring of the mirror image so you can see where I ended. The final thing I needed to do was to bring up the starting tail and join it to the bare thread between the two base rings.

1) By starting both leaves with true rings and reversing work as instructed in the pattern, when the leaves are posed as above, the outer rings of each leaf are 'face down' and the inner rings are 'face up,' making the top ring of each leaf face up.

2) TWoT direction in this project is very straightforward. Movement is down in the original leaf and up in the mirror image above.

Happy tatting, everyone.
Posted by Eliz Davis aka Tatknot at 9:16 PM

I just LOVE how you have taken each exercise/pattern a step further and this one really takes the cake ! Hats off to you :-)
Don't you just love how there are always multiple paths to a destination and the excitement is in figuring a different path and enjoying the journey?!
Merci beaucoup, m'ami

Forgot to say that the leaves are beautifully tatted .... would they work as earrings ? Perhaps with stiffening or different thread type ?
And you've turned this saying on it's head - what goes up must come down ;-P

Lovely mirror leaves. I hope to get to where you are some day. Bravo

Good for you! It's a lovely leaf pattern and you're certainly doing muskaan's exercises justice.

Lovely leaves and a nice exercise to try, well done,
But you could have just turn the second one over and it would have mirrored the first one without all the effort??

Sue, Bernice, and Jane, thank you.

muskaan, thank you. I am enjoying exploring. I do think the leaves would make nice earrings. One form of laurel has little white blooms which could be done with Josephine rings. I don't tend to wear many dangling earrings. I may yet give that a go when I finish using them for my other idea first.

Margaret, that is certainly an option if you don't mind that the front and back of the rings would be reversed. When you tat a ring, the picots tend to lean slightly backward which makes them lay fairly flat. If you reverse the work before tatting the next ring, that ring's picots will tend to lean upward when you turn the work back over. If you are using a small thread, it would be difficult to tell the difference. If I were making an arrangement of several of them, even in larger thread, I would probably flip some of them over just for the variety. It really just comes down to one's personal preferences.

I plan on working through muskaan's challenges, but since I'm pretty sure I'll have forgotten what I've learned from your post by the time I get to this point, I felt it safe to read on! I think I've learned something new. Thank you!