Last of the animal bookmarks

School is in full swing so there has been no time for tatting lately. We have a holiday today, so I thought I'd take a minute to post a picture of the last of the animal bookmarks I completed during the Christmas holidays. I changed the pattern a bit to use more than one thread color. The swan is in white and ecru and I used a Caron Wildflowers thread for the water.

I hope to see some of you at the online class. I plan to attend the evening sessions as often as possible. I have a college class to attend during the daytime session.

My year is off to a great start. Between Christmas and the new year, I managed to shake the dust off my shuttles. My oldest daughter gave me a new Lacis shuttle for Christmas along with four new books: Dianna Stevens' Animal Bookmarks, A Tatted Zoo; Karey Solomon's Tatting Turns Over a New Leaf; Inga Madsen's 12 Tatted Fairy-Tales; and Nancy Tracy's Tat's Where I Stopped. Oh, I've just had so much fun!

And I finally finished the Cecelia doily. It is complete, pressed, and ready to deliver. The doily has 42 motifs and measures 15.5 inches by 12.5 inches. 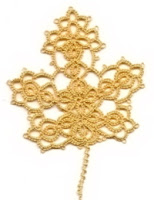 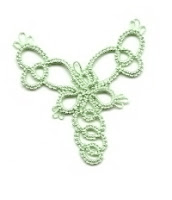 Besides completing the doily, I've been working some of the new patterns I received for Christmas. This yellow Oak Leaf was one of the designs I received in the book by Karey Solomon. The next three patterns were in Animal Bookmarks. The snake and the cockerel were designed by Dianna Stevens and the cat was designed by Diana Howe. The last image is butterfly variation 4A from Teri Dusenbury's book, Tatting Butterflies.

I must drop it at etats and then get back to my shuttles. There is so much more I want to do before school starts again next week and everything gets set aside again.

Happy tatting in the new year!
Posted by Eliz Davis aka Tatknot at 1:50 PM 2 comments: