Alphabet from a Strip Bookmark

Can we design an alphabet from a strip bookmark? YES! 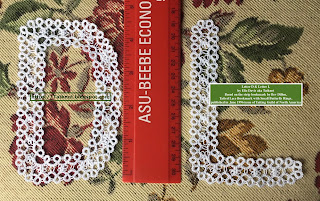 The Background of the Project:
Back in December, I was asked to tat a couple of letters to be framed. All of the alphabets I'm familiar with are much too small, so I put the brain cells to work on it. Occasionally designing is easy, but sometimes it's a very slow process. I sometimes have to let my brain play with an idea until something starts to gel. It took two months for an idea to start to form in my mind for this project, and it was based on someone else's work--a strip bookmark by Bev Dillon called Tatted Lace Bookmark with Small Butterfly Rings which was published in the June 1996 issue of Tatting Guild of North America.

Have you ever noticed that some patterns make a lasting impression on you? This is one of those. It was a favorite with me for quite a while, but I haven't tatted it in many years. No matter how many other options I considered, I just couldn't get the idea of letters based on this design out of my head. It took a thorough search of my pattern stash to find it. Bev has never published this pattern in any of the books that she sold, but she did share it through IOLI at their annual conference in Seattle, WA, in 1996. She used it in the class she taught on picot size and construction.

Working Out the Designs
You may have heard of using a mirror to help you design a corner for an edging. This technique works well to help you figure out how to turn a 90 degree angle to form a letter like this letter L. Forming the curves of the D was trickier. I got some ideas from the corner I turned in the letter L, but I needed to make the turn rounder, less sharp. Some designer out there in tatting land could probably work all of this out on a computer or in their heads, but I drew, tatted, erased and redrew, untatted, tatted, etc., until I liked what I had. The very gentle longer curve in the letter D was simply a matter of adjusting picot length to be shorter on the inside of the curve.

Permission to Post and Background of Bev Dillon's Original Design
Many thanks to Bev Dillon for giving me permission to share this project through my blog. I know many of you will appreciate the story she shared with me. It has increased my appreciation of her original design all the more. Here is what she said:


I had created the original design to be used as an edging on a gray challis dress for an antique china doll.   That doll was given to my grandmother on her 9th birthday in the 1880s.  She named the doli Emma and later passed the doll on to my mother who gave it to me.  When my daughter was old enough I gave her the doll and she has since given it to her daughter. The doll had a new dress for each "giving" so when my granddaughter received the doll, Emma was wearing the butterfly edging on her new dress.

Lastly, The Challenge
Do you have a favorite strip bookmark or edging that might convert well to letters? Since doing this project, I've thought of a few vintage ones that have possibilities. Give this a try with your own initial, and let me know how it comes out. The tatters of the world need more large letters.

I found a copy of the better picture I took of Butterbean's doll in her socks.  Here it is. 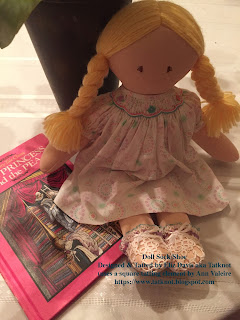 Posted by Eliz Davis aka Tatknot at 8:48 PM 5 comments:

Doll Sock (or Shoe) for Butterbean

Hi, everyone. I've missed you all so much, and I know I have loads of blog reading to catch up on. Today, though, I thought I'd try to get a couple of posts ready for you to catch you up on what little tatting I've managed to do in the past 6 months.

My last post was a picture of the socks I trimmed for Butterbean. Her cloth doll has a matching dress and really needed a coordinating look for her feet. Those are the oddest shaped doll feet I've ever examined up close. Designing something was a real challenge.

Computer glitches today ate the lovely posed pictures of this doll in her socks. This is one of the in-progress ones I took before I made up my mind about the final ribbon placement, but you can get the idea. 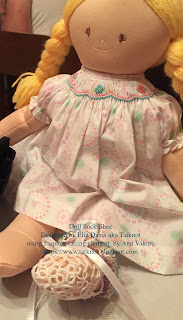 I looked at a lot of tatted baby shoe patterns, including my own, for inspiration, but nothing stirred in my brain. I found myself back at the square tatting element by Ann Valeire that I've used in other designs. These squares are the foundation of the top and sole of this design. The sock (or shoe) is tatted in Lizbeth size 20. Then I trimmed it 3/4 of the way around (none in the front) with the same trim I used on Butterbean's socks.

I don't have any plans to share this pattern. You might say this is a prototype, but there was no time to improve the original design. If Butterbean's interest in this doll holds up, I plan to make another pair that incorporates the notes I've made for improvement of the design. That will be the pattern I hope to share with you. For now, she and her mommy are both very pleased, which helps me be content with this effort for now.
Posted by Eliz Davis aka Tatknot at 1:40 PM 7 comments: