Hello, my friends. I'm hoping you can help me. In my early days of tatting in the 1990s, I had an edging pattern that featured separately tatted berries (raspberries?). I used it as the idea behind a bookmark I tatted for an exchange, placing one berry on the end of the green bookmarks tail as a sort of charm. I can't even remember who received the bookmark in the exchange. It was tatted with Finca size 16 perle cotton. Does anyone remember ever seeing such a pattern? I'm thinking it was in a magazine, possibly Workbasket, but I haven't found it yet in my stash of magazine patterns.

The Thirteenth Day of December - Thank you, Rachael Mohler! 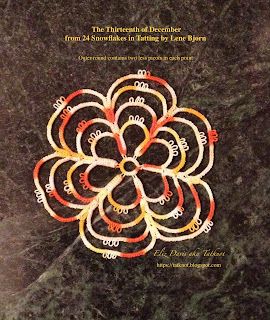 I skipped over this snowflake as I was working on the Craftree challenge to tat all of the snowflakes from this book before the year is out. Every one of those chain rounds requires a split chain and I haven't been able to remember how to do it. It seems that remembering seldom used modern tatting techniques is not like riding a bicycle. When I learned it the first time, I was following email instructions (without illustrations) that I received from David Collyer. There are now several wonderful resources out there for learning this technique, but I learned from my own experience in trying to relearn it that you should not give up after using one or even many recommended resources. You just have to find the one that finally causes what you saw in all of the others to click into place. For me, it was the video instructions for tatting the single shuttle split ring in Rachael Mohler's Hen N Chick Square. Thank you, Rachael!

My tatting of this wonderful floral snowflake is not without mistakes. I was so focused on the split chains that I failed to follow the stitch counts properly for the outer round, but the chains are long enough that it still has a nice look to it.

TWoT notes: I tatted this snowflake using traditional tatting. When I reversed work after the central ring, I started tatting the design from the back so progression was in a counterclockwise direction. However, each split chain segment moves in the opposite direction so there is a small segment of chain in each of the inner chain rounds that moved clockwise again before I started the next chain round.

Woo Hoo! I can be a bit obsessive sometimes and I hated skipping a number. :) Now I can move forward again with confidence that the next split chain is not going to trip me up.

Happy Tatting!
Posted by Eliz Davis aka Tatknot at 2:32 PM

Thank you, Sue. It feels so good to have this one done.

Your right about searching examples of tatting techniques until you find the one that helps you understand what is going on. Nice flake.

It's as well to use these techniques now and then. Its frustrating when you've forgotten how they go. Realising that split chains and Catherine wheel joins are essentially the same helped me a lot.

Lovely snowflake I did do this one but I have skipped a couple of others, cant see me finishing all the book, my eye and the injections have stopped me tatting a bit.

Totally agree with Jane. And different tutorials work for different people or at different times - just a matter of clicking.
You've done a great job on the split chains - can't identify them - and the snowflake looks like a beautiful flower ! Oh yes, you can certainly move ahead with abandon :-))

Love your TWoT mindfulness! Spot on and you are moving ahead with speed :-) (Note to self - get back to this series)
And now consider what would happen if you were working with 2 colours or wanted to change colours in every alternate round.

I thank you all very much for the kind comments.