Working on some small doilies

It is Spring break and some of the activities that were planned provided me with some tatting time as well.

The first doily I tatted this week came out great. I finished Heather Johnston's Mini Doily #21, tatted in all white. I used a thread that is slightly larger than size 10. The finished doily is about 5.5 inches in diameter--just right to sit under a candlestick. 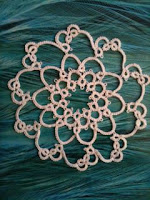 My second effort was less successful. I began one of Roger aka Freedman's doilies using some white, size 20 thread that was already loaded on a shuttle. I took it with me Wednesday planning to finish it in the car. Oh, no! When I had added in more white thread, it wasn't a match! It had not been noticeable in interior lighting, but it was glaringly obvious in daylight! Of course, this addition was back near the beginning of the doily and the two threads were not mixed strategically as I had used the shoelace trick periodically to make the shuttle thread last longer. I really like the way it was looking, so I'll start it again tonight. It's a lovely pattern. I hope to finish it before classes resume next week.
Posted by Eliz Davis aka Tatknot at 7:25 PM 5 comments: