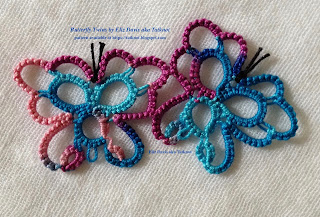 It all started with the simple desire to empty some shuttles. I chose to work with some of my own patterns. I enjoy tatting them, and it has been a long time since I've worked with some of them. I thought it would be a good way to check to see if any of them need updating, too.

With tatting direction much on my mind lately (see muskaan's This Way or Tat), I couldn't help noticing that the tatting progresses in a clockwise direction with the 3 inner rings and then changes to counterclockwise to complete the outside round. As you can see from the colors in the small split ring on the right of the left butterfly, the second shuttle that formed the unflipped stitches of that split ring, became my 'ball' thread as I reversed work to begin the outer round. This is very clear in the diagram (image) pattern, too. It was a great beginning to my afternoon of tatting because it really helped me get oriented in regards to actual tatting and a diagram. 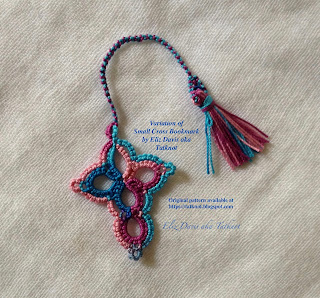 I then moved on to a variation of my Small Cross Bookmark. In this variation that allows me to come out of the top rather than the bottom, I start with the arm on the right, work an SCMR with a thrown ring for the bottom, followed by the left arm, and then a split ring to climb out into the chain round. Everything is worked continuously without any reverse works, so the design (original as well as this variation) produces an automatic front side and back side. The tatting moves continually in a clockwise direction.

So, now I felt ready for a challenge, and with a pattern that I didn't design. 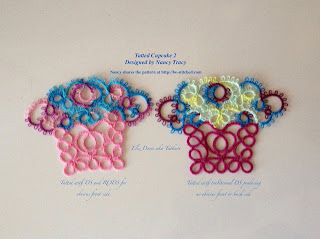 If you remember, I mentioned orientation earlier in this post. I tend to try to follow patterns in a clockwise direction regardless of whether or not I'm actually tatting in that direction (largely because I really haven't paid any attention to the direction in which I was tatting). I now realize that this is why I sometimes struggle with a diagram or find myself referring to the written instructions as I work through the diagram. It became really obvious to me as I worked these cupcakes. Once I started following the diagram in the direction in which I was actually tatting, following the diagram became so much simpler!

So, first some basics about the differences in the two cupcakes: The one on the left is worked with double stitches and reverse order double stitches to produce an obvious front and back side. (I'll have to remember share my little mental trick that makes this as easy for me to do as traditional tatting, even though I rarely do it.) The one on the right is tatted with traditional double stitches only. I reversed work and used the shoelace trick where indicated in both cupcake bases. Since I already had two shuttles loaded with matching thread, I didn't bother with the shoelace trick in the top on the left since I could easily change the working shuttle.

I decided to consider the first ring tatted to be the front of the pattern--probably the most common assumption. I've displayed them both for you with that ring facing you in the image. The basic shape of a ring surrounded by a chain is the start of both the base and the top. Since I used a solid color for both bases it is hard to see the order of progression. The wonderful thing about the variegated threads is that they make the direction very obvious. Take a look at the center rings in the tops of each. Remember those center rings are facing you just as they would if you were tatting them but they are upside down. Notice the way the thread color progresses out of those rings to move to your left? When I reversed work, I actually started moving around the diagram to the left. This was unaffected by whether I was tatting with DS and RODS or with DS alone. You can see the thread color progressing out of the top of the rings and into the chains on the left in both cupcake tops.

By habit, I kept referring to the right side of Nancy's diagram as if I were moving clockwise, which kept sending me back to her written directions to clarify what I was doing next. When I realized the discrepancy between my tatting direction and direction in which I was following the diagram, I started following the diagram in a counterclockwise direction. Wow! The tatting went much faster and smoother after that with no more need to refer to the written instructions.

I realize that I didn't get oriented properly to muskaan's diagram when I posted about my observations with her first exercise and I'll be posting a revision of that along with an explanation of what I think threw me off. I hope I didn't cause any confusion for any of you who are following this or experimenting on your own. Even though I've seem some of what muskaan will be sharing with us in the weeks ahead, and even worked with many of the diagrams, I really feel it's only now sinking in as I apply the awareness to actual pieces I'm tatting and their diagrams.

Happy tatting!
Posted by Eliz Davis aka Tatknot at 9:29 PM

Lovely butterflies and cross, it's nice to just empty shuttles and then start again with different colours

I can see that muskaan has really got you thinking as you tat! Great results.

Lovely tatting! I especially like the cross. Muskaan certainly has done her homework and started many of us on the path of thinking about tatting direction. Thanks for sharing your observations. The more people share about the tatting process, the more I learn... even if I don't always incorporate the lessons learned in to my own tatting adventures.

This is so interesting. I haven't had time to try Muskaan's exercise but I suspect this is why I just give up on some patterns- because I always rat the same way. It some designers go the other and it's never occurred to me that they could go differently. Isn't that crazy?

I love your beautiful little cross!

I’m still in the confusion boat many a time – sinking before sinking in ! If you hadn’t thrown me the lifeline, this might never have reached the shores :-)

Excellent observations & figuring out, Eliz. Way beyond what I had envisioned.

I remember now how I did your butterfly twins. I prefer tatting from front as far as possible. So I studied the pattern and decided to exit round one from the left ring (making required changes to SR such that the threads exited at the correct point), and work the little SR from the back side. Thus the entire butterfly was worked in clockwise direction, from the front (except for the tiny SR).

Totally agree about using variegated thread for many such experiments. Fabulous experimentation with the cupcakes.

I love all 3 of the above patterns and your tatted pieces displayed here are so nice !
Would love to read about your little mental trick :-)

Thanks, everyone. I had a great deal of fun tatting them, and I'm obviously excited about learning something to make future projects a little easier to follow.

muskaan, I'll include my little mental trick in my next post.

I'm amazed at the details here! You and Muskaan are really working hard in the 'research and development' department, with amazing tutorials! I admire all the observations and the details; but I'm glad I can tat without thinking of all these things, and I don't get too obsessed with front-side, back-side tatting. (I was obsessed, however, with the interlocking rings!)

However, I wanted to thank you again for the adorable butterfly twins pattern, although I admit I make single butterflies and have made many pendants and decorations on cards with different thread colors. They are fun and easy to make!

You are very welcome, Kathy. I shared it as the twins knowing that it would be easy for tatters to stop at the first butterfly. I'm so glad you enjoy it. I've mentioned before, Kathy, that I rarely bother with front side and back side. I've done it more lately out of curiosity to see whether it affects direction, and I occasionally use it in a pattern or part of a pattern for a particular look. It's another handle technique to draw on, but it isn't something I use regularly.