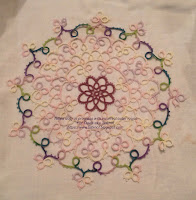 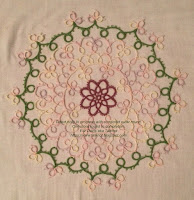 Both of these images were taken by lamp light, so I apologize for the quality. The fabric they are resting on is white if that tells you anything. Still the variegated colors in the lighter thread are more obvious than in some of the other images I've taken.

In the top image, you see the round I incorrectly tatted. I still love those two variegated colors together and really must do something else that uses them both. Unfortunately, there isn't much left of the lighter one so it will have to be a small project.

I've already started the final round of purple motifs. I'm going to wait to show it to you when it is complete. I think you'll be delighted with the designer's arrangement of these motifs. It is what first attracted me to this pattern.

As you can see by that fact that I'm making progress on the doily, my hands are much better. I'm so thankful the severe pain is gone. It's been eight months since the previous flareup. Hopefully it will be even longer before the next. I wouldn't object a bit if it never happened again. :)

Typing is one of the activities that has not irritated my hands at all, so I've been organizing the tatting files in my computer. I've found so many lovely patterns I'm eager to tat. It's like thumbing through your collection of tatting books. One gets excited again about all the lovely patterns you forgot you had at hand. As I'm about 3/4 of the way through that project, I hope to complete it this week. It has also helped me fill some of the gaps in the Elemental documents. I'll be posting an update to both documents before the end of the month, I think.

Happy tatting!
Posted by Eliz Davis aka Tatknot at 4:30 PM

Lovely doily, I'm so glad that your hands are better.

I like the 2 variegated together as well. It is intriguing to see what the next round brings :-) So glad you're back to tatting !

I'm glad your hands are better. The doily is looking lovely. I look forward to seeing the outer part. Yes, there are so many patterns we forget and then rediscover.

Thank you, all. It's such a blessing to be able to tat again.

There are a handful of tatters that are super excellent with their color choices and you are one of them. when I look for colors for my next project I always wonder what you are up to and look back at your choices cause I love them. Along with the patterns too will bee looking for this grand finally of motifs that surround this beauty! :) glad your hand feels better and can completely understand about the pain I just keep going when I should stop but some ice and stretching always makes me go further :)