Hello, my tatting friends. It has been a good while, I know. You've heard my excuses before so I'll spare you. I HAVE managed to get a little tatting done, though. 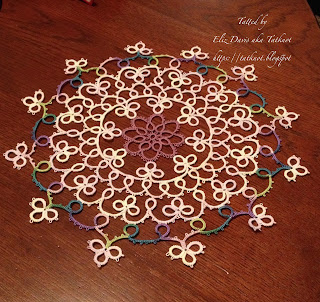 This image does not do justice to the colors of these threads, I'm afraid. The image I posted previously shows the lovely subtle shades in the lighter thread to better effect.

At this point, I thought I was ready to start the last round of motifs, but I had not paid enough attention to the pattern. The repeats in this round are all wrong! Instead of an outward facing chain between all of the clovers, there should have been such a chain between every pair of clovers. I cut this all out and started again. In fact, I was almost finished re-tatting the round when I finally realized something I would probably have noticed earlier had I done more of my tatting in natural light.

I've started that round again with a solid green. No photos so far, but I think it is working out better. I'd like to come back and try these two variegated threads together again in another project.

Posted by Eliz Davis aka Tatknot at 8:35 PM

Sounds as though it needs a fair bit of concentration! Going to look wonderful.

Probably because of differences in monitors, I can't see that the purples clash. However, if you're not happy, it's definitely worth taking the time to make it the way you picture it in your mind. I can hardly wait to see the "new" version!

By enlarging the picture I see what you mean about the two threads. Too bad you will have to redo it because otherwise it looks great.

Love the elegant curves of the outer chains !!!

The doily looks beautiful so far! I like your idea of using a solid green to pull the colors together. Green always seems to go with everything in nature.

Thank you all for the encouragement. I'm still working on the green round. Just wait until you see how the outer round of motifs fits in to finish up the doily!